If you’re used to just talking about styles and preferences, Everything DiSC’s use of dots and priorities might be a little confusing. Everything DiSC® is about more than just a single letter or two denoting your personality style. It’s so much richer.

Each person who takes an Everything DiSC assessment has their dot plotted on the Everything DiSC map. The example below shows a person who tends toward the i region, but also somewhat toward the D region. This represents an iD style. This person, therefore, is probably particularly outspoken, active, bold, and persuasive, as these qualities generally describe people who share both the i and D styles. 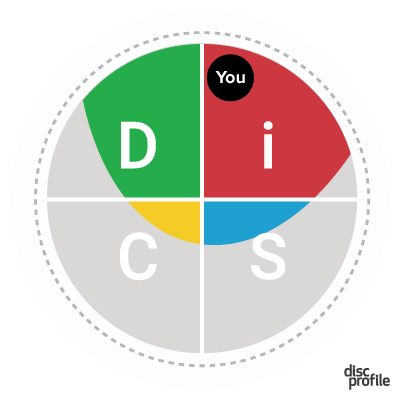 Everything DiSC defines a style as “a set of typical response patterns that are expected from a person. However, that doesn’t mean that a person can only exhibit that pattern. For instance, an individual tested with a resulting dot located in the D quadrant will demonstrate more dominant behaviors and preferences than a person with another style, but will also, from time to time, show behaviors and preferences that are associated with the other three quadrants.”

If you look at the DiSC map for several people you’ll notice that not everyone’s dot is placed at the same distance from the center. That distance is also meaningful. People whose dots fall toward the edge of the circle are said to be much more inclined toward their DiSC styles. The style characteristics of someone with their dot near the outer edge will be much more pronounced than for someone whose dot is closer to the center of the circle.

As explained in the Everything DiSC Manual:

The shading around the dot provides a rough approximation of the person’s comfort zone. In the example below, this person with a D style will find behaviors such as focusing on results, welcoming a challenge, and being accurate will come easily. Conversely, behaviors associated with the styles with little shading (being collaborative, offering support, seeking stability) will require more conscious effort. The shading reinforces the message that we are all a blend of all four styles.

The shading also includes the three priorities closest to a person’s dot. In our example from Everything DiSC Workplace, these are accuracy, challenge, and results. The priorities are an additional measurement unique to Everything DiSC. As the Everything DiSC Manual explains: “the priority scales measure much more narrow constructs. For example, the i DiSC scale measures a sociable, lively disposition. The priority scale of Enthusiasm measures only liveliness.” This provides a more nuanced feedback in the resulting profile.

Not all people with the C style, for example, are the same. Some people will show more than three priorities. Their DiSC map will include extra shading if their score on the priority is over a pre-set threshold. The example below shows an additional priority of enthusiasm for this D-style individual. 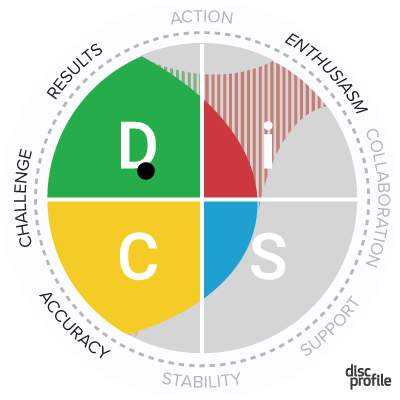 The Everything DiSC Manual explains:

“This threshold was designed such that approximately one-third of respondents would receive an extra priority in their report. As well, shading does reflect the respondent’s inclination. In such a case, the individual’s dot is closer to priorities on the opposite side of the map, and, consequently, the individual would likely be more comfortable adopting those behaviors when they are needed. As mentioned earlier, however, the Everything DiSC shading is only designed to be a rough approximation of an individual’s comfort level with different regions of the map.”

Empower your learners to engage and connect with others in their organization with Catalyst.