You, too, can deliver a DiSC® program

We often get calls from people who are experienced trainers but have never used Everything DiSC®. They sometimes assume they’ll need certification as when they use other assessments, but it’s not required with Everything DiSC. We do offer facilitation kits that many trainers choose to buy, but not all do. Recently a caller choose to create her own program without resources available in a facilitation kit. We followed up with her to hear how things went using Everything DiSC Workplace with two groups in her organization. We think hers in a good example of what a creative and skilled facilitator can do.

Michelle Tompkins is talent development consultant at PeaceHealth, so she has plenty of experience in training and development. She was also fortunate that her new CEO already understood the value of DiSC, having been introduced to it before. He gave his active support for Michelle using DiSC during a retreat with directors. That session went very well. The directors were enthusiastic learners and came out of the session asking for the styles of their bosses. They wanted to put what they learned to immediate use beyond communicating better with their peers. They wanted more insights into those above them in the org chart. Michelle was more than willing to offer DiSC to the executive team and include it in their ongoing leadership development.

Michelle shared a couple anecdotes with us regarding how training went. One valued leader looked at her stressors and responded, “This is why I’m retiring.” Another officer shared that he now better understood how to work with another director: “I get her now.” They were sharing their reports before training began. 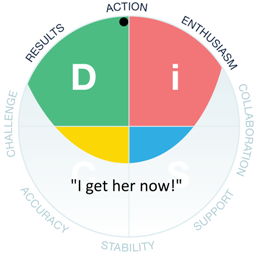 Working with an executive team

We were curious about several things. First, we’re often asked if participants in a DiSC training should get their results before the training or during it. Many trainers choose to hold back the results in order to provide better context for them and to reduce opportunities for misusing the results. Michelle chose to not only allow participants to see their profile results, but to also respond to a homework assignment she created for them. She asked the executives to read their profiles, underline parts that were particularly insightful, review their stressors, and reflect on which styles were easiest and most challenging for them to work with. She expected them to come to training able to share one communication strategy they wanted to try as a result of reading their profiles.

We were curious about the program Michelle designed and she generously shared with us. She called her first activity a DiSC scavenger hunt. She assigned people into triads and asked them to interview each other about their style. She had assigned seating so participants would be interviewing people with styles that differed from their own. The interviewer had four questions to ask: What are your motivators? What are your stressors? What are your fears? How can we work better together? After everyone was through, the group was sorted into new triads and the interviewing continued.

While participants were busy, Michelle created four quadrants on the floor by the simple method of putting down tape in a big plus sign. She asked everyone to pull their chairs near the quadrant she assigned for their DiSC style. She identified one person and asked those who had interviewed him or her to share their insights. Then she identified another person with the same style and asked for more insights. As people spoke, Michelle used a flip chart to list qualities mentioned and associated with the DiSC style. Then after working with everyone on those with the D style, she moved to those with the i style and so on.

This activity helped the team learn more about various DiSC styles by first learning more about their team members. Some trainers do this in the opposite direction—participants learn about the DiSC styles and then their co-workers. Instead of building up a chart listing qualities associated with each style through an activity like A Day in the Life, she did it through results from the interviews conducted.

Many trainers also don’t have this much time to work with clients or colleagues, which is unfortunate. This time provides such a great opportunity to share and to show the vulnerability that builds trust on a team. It is a safe place to talk about assumptions we’ve made about our co-workers and to gain insights into their priorities and personalities. Michelle’s activity was really more of a treasure hunt than a scavenger hunt, we thought.

Michelle really likes the Platinum Rule and posted it in the room to set the tone for the next activity. The Platinum Rule—sometimes credited to Dave Kerpen—states, “Do unto others as they would have you do unto them, not as you would have them do unto you.” With this rule in mind, she moved the group around: D-styles moved to the S quadrant, Cs to the i quadrant, and so forth. In their DiSC style groups, they discussed things they could do to improve relationships with those of the style where they were sitting. Then they reported out their ideas. Michelle asked them all how this adapting of your own style to meet the interests of another feels. There was agreement that it felt really hard.

Michelle created a paired activity for after lunch. She ran Everything DiSC Comparison Reports for everyone. She chose pairings that she thought would be most meaningful—usually those who worked closely with each other. She asked pairs to read their reports and complete the last page of that report (Reflection and Dialog) together. Finally she asked them to share one key strategy from this activity that they were committing to use with their partner in the future.

Finally she brought the group of executives back together to turn their attention to group culture. She pulled questions provided in the group report to use for the discussion. An example: how might someone with a differing style feel and behave in your group?

Michelle was able to schedule five hours for this training. Knowing how to construct a great training, she was able to use the Workplace profile, the Comparison Report, and the Group Culture Report to create worksheets and activities. The CEO gave her support and showed his commitment to this training by opening and closing the sessions.

Not everyone has the background or the executive support to conduct a training like this right out of the gate. That’s why we provide the training materials and videos in the facilitation kits. Everything DiSC has great resources to provide a professional training making Everything DiSC a do-it-yourself program. But Michelle is an excellent example of when no additional training resources are needed – just a talented, creative, committed facilitator.

Empower your learners to engage and connect with others in their organization with Catalyst.